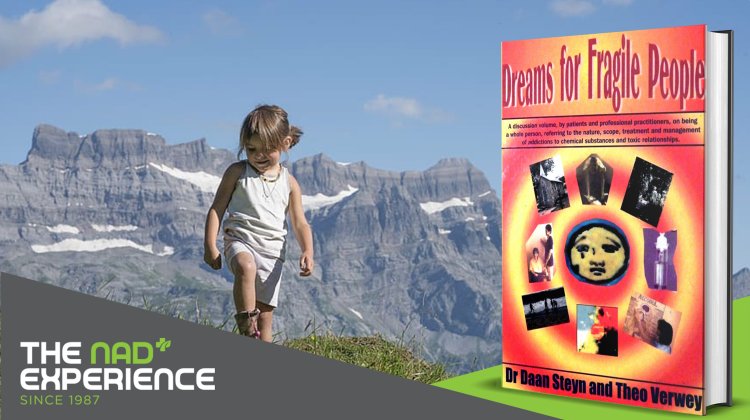 More scientific information which can explain this nightmare behaviour is now more freely available than ever before. Furthermore, a method of treatment has been developed over the years by one of the authors in conjunction with a team of independent practitioners. These insights and techniques make it possible for fragile people to better understand their own behaviour and it enables them to develop the stability and self-control to change their dreams into constructive reality.

When one deals with people, attention should be given to every aspect of life - from the biochemical foundation of behaviour to the meaning of life and the value of faith (including the transpersonal or spiritual dimension). In fact, the contribution of Dreams for Fragile People lies mostly in the emphasis placed upon biochemistry and on religion, and also the unity of life, also in addiction.

Dreams for Fragile People is based on two concepts. The one is that the method of treatment used at Alkogen should be understood within the context of a new paradigm, that is, within a new, comprehensive or ecologically complete way of interpreting that which is perceived and experienced. The other is exactly the opposite - that the traditional way of treating addicts is less successful than it should be because the behaviour of the addict is not understood within the context of a realistic and relevant paradigm. That is: the traditional methods of treatment are often part of an incomplete and fragmented view of man which is rapidly becoming old fashioned in the natural and the social sciences, including medicine, psychology and theology.

From these two ideas it follows logically that, if we wish to understand the behaviour of addicts (and our own), a new paradigm is required. A new paradigm is not something which is created, certainly not in a single book. It is something that develops. Paradigms are like children. One day you suddenly realise that the person has changed - he or she is no longer a child but a young adult and that change has been taking place for a long time. Such developments in the anthropology of the West have been taking place for a long time, certainly since the 1970's, for many reasons.

A very important reason is the mass of new information about human beings and their behaviour which is becoming available, particularly within the biological sciences. People and things change but Westerners still largely think with the concepts and paradigms of the 1950's and 1960's, especially when it comes to human behaviour, religion and addiction. There is a need to update our views about ourselves and to integrate our anthropology into a more complete paradigm with the new data about the foundations of human behaviour.

Such a change in our perceptions of our own human experiences is a huge task and requires a major effort by the whole culture. Many people, in many areas of life in the West, are indeed working towards such a new understanding for such a new paradigm requires that every aspect of a culture such as the history, religion, philosophy and psychology, everyday life at work and play, needs to be reexamined.

Stanton Peele (1998, p18), an international authority on addiction, states that a successful theory for addiction demands the following: "(it) must synthesize pharmacological, experiential, cultural, situational and personality components in a fluid and seamless description of addictive motivation". We may add to this that it must also include the effect of the soil, the ground upon which we walk, that is, the dietary value of the food which it produces and the effect of the polluted air we breathe. It should, in other words, take cognisance of man as a living part of the ecological system as a whole.

This includes our biorhythms and also the macro-rhythms of the seasons and the universe. It should consider factors such as the climate (Eskimo's, for example, never knew alcohol, because the climate could not produce plants with which to make alcohol) and the topography, the characteristics of the country where people live. This applies to every science that studies the normal behaviour of man.

The ideal would be not only to include all the contributing factors, but to mention them simultaneously so that the connections between them become clear. Naturally, this is impossible and that is the reason why Dreams for Fragile People is a book with such a wide scope - it is as comprehensive as possible in its various chapters.

This attempt to be as comprehensive as possible also influenced the format of the book, as we decided not to describe everything systematically, chapter by chapter. Rather some comments were included after each story. Integrated explanations and descriptions are included in the theoretical chapters. The same information is sometimes given in different sections because they contain key ideas which connect various aspects of life and because one cannot say everything at the same time, as pointed out above.

Now perhaps it is understandable why so many aspects of life are discussed in this book - from the biochemistry of pleasure and addiction to the importance of humour, to the search for the meaning of life and the experience of life and death. Religion and the Bible are important to many people, and form the basis of their education, understanding and paradigm. It is, therefore, not possible to exclude the meaning of the Bible when discussing human behaviour, especially because it too is understood and translated within the context of the old paradigm which is becoming more and more outdated. Where applicable, basic terms such as "soul" and "energy" are discussed within the context of new insights and placed in the context of a more complete framework or paradigm.

Dreams for Fragile People is, therefore, not a book that can simply be picked up and read through. One should rather open it every day and find an interesting piece to read. This is a multidimensional book. We regard it as a workbook or a collection of experiences and points of view which may be read on various levels.

It is a storybook: there are stories of a LSD-trip, of the excitement of gambling, the experiences of children of addicts (and of the fathers and mothers of addicted children). The solutions to the problems of life they have found are also discussed. The stories have been published, as told, with as little editing as possible to give a true reflection of the people who told the story.

In a real sense, Dreams for Fragile People is a practical workbook. By using the index, themes such as the causes of alcoholism, aggression, burnout, co-dependency, energy, faith, guilt, happiness, love, loneliness, sex, et cetera, can be looked up. Not only theories, but also practical tips, are given. It is our hope that Dreams for Fragile People will be a starting point for further discussions and that it will be used as a framework for discussions, also in psychotherapeutic groups, and chats between people.

Dreams for Fragile People is also a reference book so that students and other researchers may have access to the latest information on addiction and toxic relationships and other related issues. Psychological treatment in the context of the new paradigm is inevitably interesting to psychologists.

Dreams for Fragile People has ultimately grown to be more than just a book on addiction and toxic relationships. It has also become a book about our people today. Dreams for Fragile People is not a recipe book. The book is filled with references to supplements and medication, but no formulae, dosages or prescriptions for treatment are given in this book.

The AIMS of this BOOK: Firstly, Dreams for Fragile People is meant for people who experience problems themselves and want to know more about addiction, according to the personal experiences of people who have come for treatment. Secondly, on a more technical level, it is a book for those interested in the treatment of addiction and toxic relationships. This means that Dreams for Fragile People provides a model of addiction, within an ecological paradigm, including practical methods and solutions. It also gives an idea of 'normal' behaviour.

"Normal", that is, in the situations in which we find ourselves daily, and therefore another purpose of the book was to record important aspects of our own psychology and religion. The outline of aspects of a relevant and applicable psychology was, in other words, an important goal. It may be noted that the holistic approach is based the on South African philosophical theory, holism, of Gen J.C. Smuts. Dreams for Fragile People has a distinctive South African perspective that, we believe, reflects the inherent African awareness of being part of a great whole.

THE LAYOUT of the BOOK: The first four chapters include most of the scientific and technical information and are based on the most recent literature. Those who do not wish to work through all this information, may use the explanatory notes at the back of the book. These contain definitions and brief discussions on the more important topics. Two stories (chapters 5 and 6) illustrating the natural ability of people to recover with a minimum amount of appropriate support is presented in the first section. The tale of Marie Krige is also included here (chapter 7), because life and death are part of our everyday living. Chapters 45 and 46 form a useful framework for reading the rest of the book in context. They are included near the end of the book to give the reader a chance to read the experiences of real people before coming to the theoretical summary of the book.

PART II, III AND IV are the stories of the people themselves. Each section is introduced by a technical chapter.

In the following section, PART V, people of various professions chat informally about their own views of and experiences with fragile people and of addictions. Included are written contributions of other colleagues. This section should be of value for professionals from various disciplines.

PART VI gives an outline of the more abstract themes covered in Dreams for Fragile People. The purpose is to integrate all the themes into a whole.

The IMPLEMENTATION, PART VII, could well be the most interesting section for many because it focuses on practical issues, such as motivation, as experienced by our fragile people over the years and on how professionals have processed these experiences into a method of treatment.

11 Nightmares of a Child - Eating for Control by Deidre...

6 Effortless Dreams - Energy to be Yourself by In-Jung...