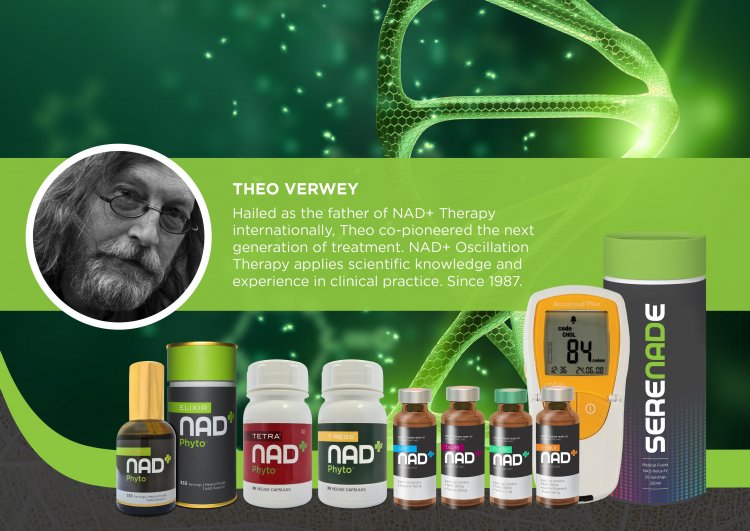 THE EVOLUTION OF NAD OSCILLATION THERAPY

The whole process of evolution could only be possible with the contributors:

Dr. Abram Hoffer, (MD PhD FRCP(C) Victoria, British Columbia, honoured by the Institute for Functional Medicine as one of the top 5 pioneers of new medicine for the 2Ist Century), Dr. Stella Verster (psychiatrist),

1994  |  First media article is published in Sputh Africa about NAD Therapy and diseases.

1997  | Alkogen is featured on the television programme Carte Blanche with Ruda Landman.

1999  |  Prof. Daan Steyn & Theo Verwey publish the book Dreams for Fragile People, a chronicle of the experience of NAD IV and oral therapy by practitioners and patients.

2002  |  Theo Verwey formulates the calculation of extracellular NAD/NADH ratio based on lactate and pyruvate ratio. NAD Ratios can be done at every pathologist around the Country. More than 10 000 tests are done.

2002  |  Theo Verwey publishes NAD Therapy Too Good To Be True? Dr. Abram Hoffer, MD PhD FRCP©), Victoria, British Columbia “For these reasons I consider the information in the E-book: NAD Therapy! Too Good to be True? so valuable and important and I fully expect to see the corroboration of this work world wide once it becomes known to the medical profession and even more when the general public of sick people and their families hear about it.”

2003  |  Journal of Orthomolecular Medicine Vol. 18, No. 1, 2003, Prof. JP Cleary The University of Wisconsin–Madison. “The potential of NAD Therapy to treat diseases is now going forward in South Africa. Theo Verwey and his group of clinicians are now the future of this movement to reform medical therapeutics. It is the concept of NAD as a medicine, which must not be ignored; the needed research must be allowed, encouraged, the results evaluated, acknowledged, and passed on to the young physicians of today.”

2009  |  Theo Verwey Formulates the calculation of intracellular NAD/NADH ratio based on point of care finger prick blood tests. Since then more than a thousand NAD/NADH ratios were calculated for more than 150 diseases diagnosed by independent health practitioners.

Food We Eat Affect Our Genes